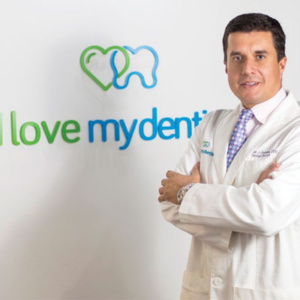 Ricardo Guevara is the creator and director of I love my Dentist clinic, Dr. Guevara was born in Mexicali, Mexico. He received his bachelor’s degree from the UABC in 1991. In 1996 Dr. Guevara moved to Boston, MA where he studied English as a second language at Harvard University; And after a time of hard work and dedication Dr. Guevara was fortunate to work for more than ten years as Associate Director of Dentistry at Codman Plaza Health Center in Dorchester, Dorchester, Massachusetts. While in Boston, Dr. Guevara became a Master of Arts at Boston University as well as a faculty member at Tufts University. At the same time, Dr. Guevara served as Dental Director in the prestigious Residency Program in Advanced Dentistry (AEGD residency program) also at the same Codman Square Health Center. From 2008 to 2012, Dr. Guevara also served as Dental Director of the Mobile Dental Program at Boston Academy Tech.

In 2009, Dr. Guevara received a citation from the City of Boston for “His outstanding commitment, innovation and dedication to Dorchester Education Complex students.”

Also in 2009, Dr. Guevara received the Medical Excellence Award presented by the DentaQuest Foundation, the State of Massachusetts and the Massachusetts Community Health Coalition.

And recently, in 2012, Dr. Guevara was nominated to receive the Community Health Leader Award Robert Wood Johnson for all the years he provided dental treatment for patients at Boston Home, a non-profit, Care for adults with physical disabilities, multiple sclerosis and other progressive neurological disorders.

Dr. Ricardo Guevara has dedicated his professional career to all aspects of Periodontics, Prosthodontics, Implants and General Dentistry. During the use of his training to treat patients with all types of dental needs, he is especially interested in periodontal integration, prosthetic dentistry and implant in relation to the restoration of a single tooth or a whole denture. To keep abreast of the latest developments in these same areas, Dr. Ricardo Guevara attends numerous continuing education courses and symposia and has received an additional certification in INVISALIGN.

We use cookies to ensure that we give you the best experience on our website. If you continue to use this site we will assume that you are happy with it.I'm HappyPrivacy Policy